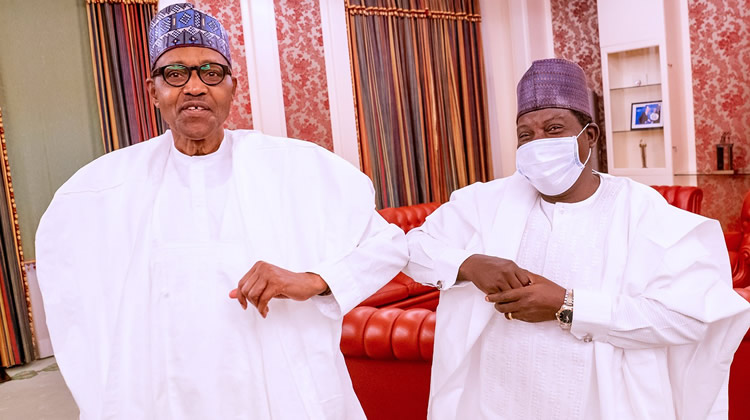 On Sunday, January 9, the All Progressives Congress will meet to decide a substantive date for the party’s national convention.

This is partly in response to the caution by the President, Major General Muhammadu Buhari (retd.), in an interview which aired on the Nigerian Television Authority on Thursday.

In the interview, Buhari warned that by dilly-dallying, the APC may be setting itself up for defeat by the opposition, PDP.

The Chairman of the Northern Governors’ Forum and Governor of Plateau State, Simon Lalong, who met with the President at the Aso Rock Villa, Abuja, on Friday, said Buhari’s caution is a wake-up call for the party to have a seamless convention to avoid disintegrating.

Lalong who spoke with State House Correspondents said Sunday’s meeting will harp on the proposed date for the convention.

He said the APC governors have now assured the President that the convention will hold in February.

According to him, the party will redouble its effort and do the right thing.

While noting that the APC is a hodgepodge, the Plateau State Governor said what matters is that the Party elects its representatives at the end of the day.

Quizzed about ongoing efforts by APC leaders to avert losses in 2023, Lalong said, “Thank you for that question. Yes, I agree that all the times there are meetings, especially taking final decisions on the party, I’m always part of it and part of it was also why I visited the President and the President still stands committed that there must be an immediate convention.

“You know, when a convention is coming, there are fears here and there, some people will tell you it will work, it will not work. I don’t want to jump to conclusions, but the visit to the President has already assured us and you know that there is already a notice that all the governors are meeting on Sunday. By Sunday, we will tell you when we are doing the convention.

The Governor explained that despite the concerns the President raised, the governor’s are determined that nothing will stop them from holding a peaceful election.

“Some parties have done their own, the PDP did its own, nothing will stop APC from doing its own.

“So, all the fears that we’re talking about, which the President also re-echoed, are also telling the governors to please do more and keep the party alive. So, by God’s grace, we’re going to put our party alive,” he said.

The Forum’s Chairman added that steps will be taken to address all the issues affecting the conduct of the convention.

“Well, these are things we’re going to discuss, but I’m not drawing a conclusion. But I always tell you that a political party is a cumulation of interests. The interests may be the same, they may not be the same, but at the end of the day, what we’ll do is that we are going to elect people who are going to represent you.

“But I just want to assure you that when we meet, we’ll harmonise all interests and come out as one APC. That’s what we’re hoping for.

“Whatever will be the interests that we’re going to discuss, I have great hope that at the end of the day, our goal is to elect people who will take care of our party, because that will be the beginning of the process towards electing those who will take over from this present government.”

On whether the APC can influence the withdrawal of ongoing court cases against the convention, Lalong affirmed that the legal tussle may be nothing of consequence.

According to him, “There are procedures for holding court processes. Many of the court processes were there when we set up the caretaker committee, but up to this moment, if you go to take a census of some of the court proceedings, you will realise that a lot of them have been resolved out of court. So, it’s still the duty and functions of the party to resolve such issues.

“But we must not wait to resolve all court cases before going for the convention. I don’t think so because there are also ways to resolve court processes, even after convention.

“I had a court process in my state, that did not stop me from going on and at the end of the day, we resolved the court process and we’re still going on, preparing and waiting for convention.”

On whether the APC can meet the speculated February 5 date for the convention in view of the need for mandatory 21-day notice to the Independent National Electoral Commission, Lalong stated: “Well, I’m not the chairman of the convention committee, but I want to assure you that we’ve called a meeting for Sunday and if there is a meeting on Sunday, and you’re thinking about next Friday. Just wait and see what will happen before next Friday. I don’t want to draw conclusions now.

“You’re already talking of litigation, you draw conclusions, somebody will go and file a case tomorrow. So, I don’t want us to draw a conclusion on that. But I want to assure you that we are meeting. We already sampled the minds of many of the governors.

“We’re meeting and we’re very hopeful that we’re going to consider the admonition given by the President, it’s a warning signal to all of us to sit up and ensure that we have a seamless, very clean, fair and transparent convention so that our party will not get disintegrated.”

The Plateau governor also spoke on the security situation in his state, expressing delight that the military will now be able to deploy Tucano jets against terrorists following their recent re-categorisation.

He lamented that kidnapping has become more prominent in Plateau State.

“Well, in terms of security, some of the issues we raised with the President last year, we’re already beginning to see progress. You’ll recall that we mentioned that we are very eager to see the use of the Tucano jets so that we can have massive engagement with all the bandits.

“Part of it was also the status of some of these bandits around and you can see that already the federal government has described them as terrorists, the military is now going to do full engagement. These were some of the issues that were raised in our communique in Kaduna.

“So, we’re already beginning to see and we’re also getting prepared in the north for such action, that’s what we’re expecting. Let us do massive action that will ensure that within the first quarter of this year, people will have hope that we’re going to live peacefully in all the parts of the north because we’re expecting these actions before the next rainy season,” he said.

Lalong said as an agrarian region, the Plateau State government wants its citizens to be able to access their farm as insecurity has kept them away.

“These are some of the issues that we’re meeting and preparing for.

“The last part of it is the engagement of traditional rulers. Of course, we’ve sent a bill to the National Assembly on the role of traditional rulers and we’re hoping that we’ll pursue that on behalf of Northern governors to ensure that this bill gets through so that traditional rulers will also complement the efforts of the government in addressing insecurity in their various states,” he said.