How Wizkid introduced me to his deaf photographer – Naomi Campbell 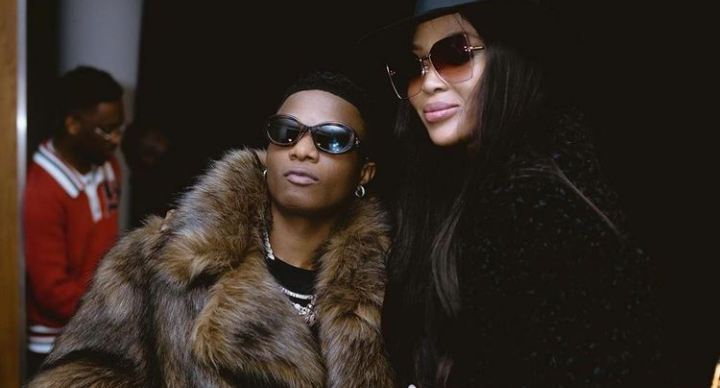 Campbell, 51, who fondly referred to Wizkid as her little brother, took to her Instagram page on Thursday to hail the singer for a successful career so far.

She further narrated how Wizkid introduced her to his deaf photographer after performing at the sold out O2 Arena for his Made in Lagos album tour.

She said, “Your first night at 02 after your show, you should be celebrating but you are introducing me to your photographer who writes on his phone that he would like to be the first Indian photographer, and break the barrier for the deaf and dumb community to make it in fashion.

“I start talking back and you tell me, he can’t hear you and can’t talk to you either, you then proceed to take my phone and write and translate to him so we can be connected!! This is who you are!” (sic)

Crediting the Grammy winner for making Afrobeats a mainstream sound in the world, Campbell disclosed that the superstar had refused to release several albums because he is a perfectionist.

“Big Wiz @wizkidayo, proud to call you my lil bro and to see with everyone, your journey unfold. Many albums we will never hear, as you are the quintessential perfectionist!

“You have brought Afrobeats mainstream to the world, and always bringing your brothers and sisters alongside you! 1st Billboard Top 10 Essence, breaking records, selling out 02 for three consecutive nights, Grammy nominations, Apple artist of the year and many others,” she hailed.

The mother-of-one also drummed for the singer for his upcoming “Vibes on the Beach” concert, which is set to hold on Friday.

“Our #Starboy Wiz for the people! Wiz to the World. Knock ‘em dead tomorrow in Lagos. I love you always, your sis,” she wrote in the caption.