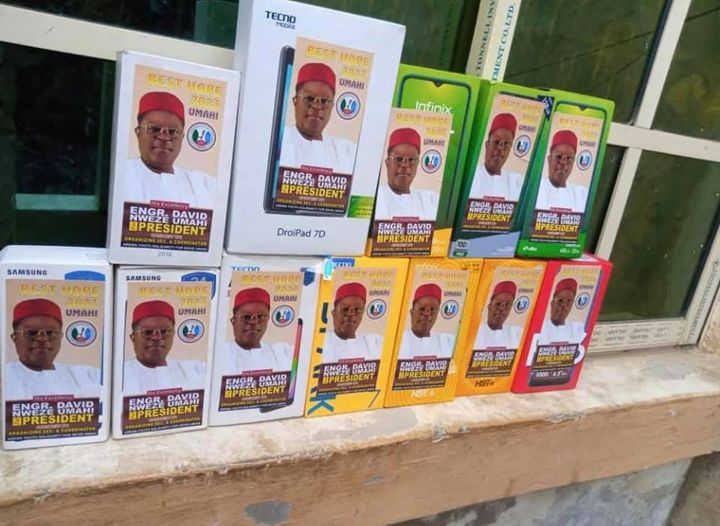 The Governor of Ebonyi State, David Umahi, has dissociated himself from campaign posters with inscription stating that he wants to run for president in 2023.

The posters have been widely circulated on various social media platforms and online Television stations, as well as strategic locations across the country.

A statement issued by the Special Assistant to the Governor on Media and Publicity, Francis Nwaze, said the gesture may be in good faith.

The statement, however, said the Governor would only heed the call to run for president if he is divinely inspired.

It read, “The Governor of Ebonyi State has observed with keenness, campaign posters on smartphones bearing his name and picture with the inscription “Engr. David Nweze Umahi for president 2023” and widely circulated on various Social Media platforms and online Television Stations, as well as strategic locations across the country, and I, elect to make the following clarifications:

“That His Excellency the Governor did not authorise such campaigns on his behalf, however, the Governor understands that the move may be in good faith, a show of solidarity and true belief in the experience and ingenuity of His Excellency to highly contribute in the development of our dear nation – Nigeria.

“That His Excellency, being a respecter of constituted authorities could not have launched such full-scale campaign into the office of the President even when the electoral umpire is yet to open the window for such exercise.

“That His Excellency as a strong believer in the Divine Mandate of God would wait on the Lord for divine directives and unless and until he is divinely inspired to vie for the Presidency, he wouldn’t heed the clarion call.

“That the Governor is presently occupied with delivering dividends of democracy to the good people of Ebonyi State, transforming the state in agreement with his five covenants with God as well as repositioning Southeast and contributing his quota as at when needed in the nation-building.”